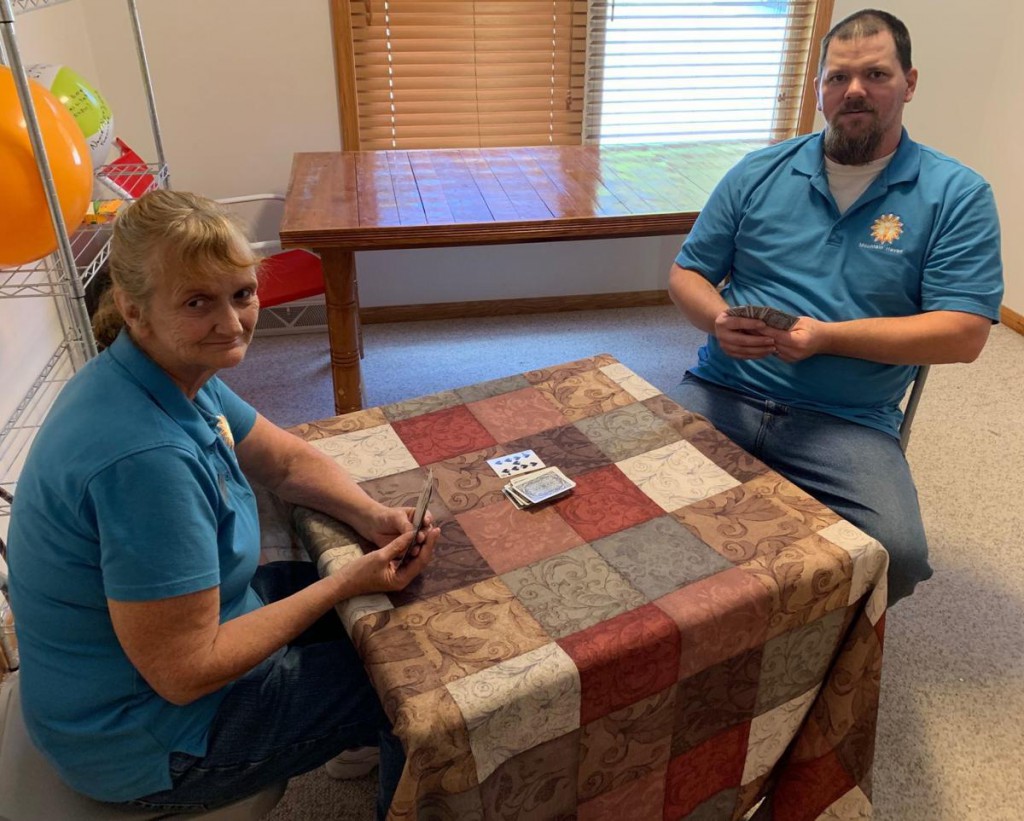 At Mountain Haven Wellness and Recovery Center in Oakland, individuals with behavioral health issues can gather daily for meals and workshops to promote wellness and recovery efforts.
These services are all offered free of charge and without the need for an appointment or referral.
An open house event is planned at the center from 11 a.m. to 2 p.m. Thursday, Oct. 17. The address is 315 Dawson Ave., Suite A.
According to current coordinator Kathy Schrock, Mountain Haven got its start several decades ago as a drop-in center called Right Step. A few years after that, the name was changed to Harvey House, named after Louise Harvey, a World War II veteran nurse who wanted to make people aware of mental illness because of her son’s experience with schizophrenia.
About 10 years ago, the name was changed to Mountain Haven “because we are in the mountains, and a haven is a safe place to go,” Schrock said.
She noted that at this time, Thursdays and Fridays are the busiest days, with an average of about 10 people a day. Special occasions such as Thanksgiving dinners and Christmas parties bring more attendance. Peers range in age from 21 to over 70.
“We do educational classes; we have some depression groups; and we have some fun groups like one we call fun fitness,” Schrock said. “We provide a meal. And since we do serve the homeless, we have a washer and dryer, and folks are allowed to come in and wash their clothes and take a shower.”
Guidance is provided for finding community resources and peer support, and transportation is also provided.
Schrock explained that money for the program comes from a grant through the Maryland Behavioral Heath Administration. The center is affiliated with two other centers: Hope Station in Cumberland and Soul Haven in Hagerstown.
Schrock has been coordinator for the program at Mountain Haven for about six years.
“I started as a peer years ago, which means I myself had suffered from mental illness,” Schrock said. “I was hospitalized several times, attempted suicide several times and was on some pretty heavy medication at the time.”
One day, Schrock realized that she needed to make a change.
“I decided that wasn’t who I am,” she said. “I couldn’t let the real me come out. So with the help and support of my family and friends, I finally got off the medication and stopped seeing therapists. I was no longer on medication, but that doesn’t mean I still don’t struggle.”
Schrock grew up in Garrett County and was placed in foster care at the age of 3. When she was 16, she was returned to her mother, but the situation was still abusive. She ended up dropping out of high school when she was expecting her first child.
“In all those years of foster homes, I was seeking love,” Schrock said.
Eight years later, she was divorced and moved to Arizona, where she met her second husband. When he died from brain cancer, Schrock ended up back in Garrett County, eventually marrying her current husband, Bob Schrock.
“He has been my strength,” she said. “He has been my support; he’s watched me cry; he’s watched me laugh; and he’s watched me get angry. He has been a wonderful tool in my recovery.”
Their blended family includes five children, four grandchildren and two great-grandchildren.
At the center, Schrock prefers the term “peers” rather than “clients” in order to help those who need services feel more comfortable.
“That makes them feel like they are equal, like I am not above them, because they know that I have been through some mental health and substance abuse issues myself,” she explained.
Jamie Beeman is the other full-time employee at the center, serving as the driver and an advocate.
“I started out as a peer, too, and I ended up getting this position,” he said. “I’ve been here five years. I like helping people, so I know it’s important.”
Schrock said the center has a very good success rate.
“We have had peers come in who have gotten jobs,” she said. “They have applied for disability and have received it, and they’ve had help with housing. We cannot offer monetary finances, but what we do is we can refer them, and we can go with them to housing appointments and doctor appointments. They come here, and sometimes they don’t know where to start.”
She knows it is important for peers to feel like they belong.
“We’re a family,” Schrock said. “No matter who comes through that door ... we may not be related, but we are family. You’re free to be yourself.”
In the corner of the dining room, two pictures serve as reminders to the peers.
“Mountain Haven has suffered a loss in the last year,” Schrock said. “One gentleman committed suicide, and the other gentleman died of natural causes. They were a tremendous attribute to the center. The pictures serve as a constant reminder that you need to seek help and you need to take care of yourself, and that is part of recovery.”
Schrock encourages the community to attend the open house on Oct. 17.
“We want to make the community aware that we are here and have them come and meet our peers and staff and learn what they’ve been through,” she said. “Their stories need to be told. People need to be made aware, and that hopefully will stop some of the stigma — and by that I mean labeling. Sometimes you’ll hear people say, ‘Well, there goes a crazy person.’ That’s labeling, and that is what hurts a lot of peers with mental illnesses because they’re afraid to seek that help because of being labeled.”
For more information, call 301-334-1314.