FireFly Farms, Among the Most-Awarded in the US, Proudly Celebrates Another 15 Awards for its Handmade Cheeses in 2019 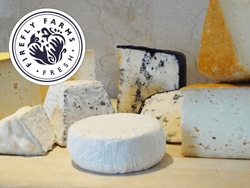